Time for the 15 month update already! And this month I’m actually on time! Wow!

The biggest news from this month– GARRETT HAS WORDS!!!! YIPPEE!

Since he got tubes put in his ears, he has developed a vocabulary of about 12 words. Here are a few of them that I can remember at the moment:

And then there is his all-time favorite:

He still isn’t using Mama or Daddy consistently, but we have heard him say them so I guess I should count them. All these words happened within a week after his surgery, spilling out of his mouth so quickly that I can’t really pinpoint what his first word would be. I think since he uses it so much and so correctly that I will just say “Uh Oh” was his first word. Not that I’m actually filling all that stuff out in his baby book or anything.

We had the followup appointment to get his hearing checked, and the results were pretty good. The tympanic hearing test thingie was great, but the other hearing test was not 100%. He had a hard time responding to a lot of the lower tones, so they want us to come back for a recheck in 6 months. I pray that his hearing will be regained 100% by that point.

He has got 10 teeth total and 4 more are popping through soon. He has already had three haircuts, which always leave him looking cute as a button!

He’s a whiz at operating my iPhone and is not even deterred by the slider at the bottom of the screen. He quickly learned to slide his finger across the screen to get into all the apps and other goodies.

Here is a warning, if any of you ever get a gobbledy-gook email from me or a crazy voicemail, it’s likely Garrett that is the culprit. He can even operate the remote control and find his favorite shows! I don’t know if it’s luck or skill, but occasionally I find him watching a Tivo’ed episode of The Wiggles or Clifford the Big Red Dog, and I have no clue how it got turned on.

After we all recovered from the plague that visited our home a few weeks back, I put Garrett to work cleaning up the joint. I like to tell him that he’s gotta be handy with the steel, if you know what I mean, earn your keep.

And that’s just what he’s learning to do. Earn his keep. Aaaaahhhh, who knew that we could get him trained this early in life? This is GREAT! He’s even helping out around the office. We need to put this kid on the payroll!

It’s been a month of imitating nearly everything that he sees us do–vacuum the kitchen, talk on the phone, cook dinner, feed the dogs, go to the bathroom. Yes, G wants to watch my every move while I am in the bathroom, then help me flush and wave goodbye to the pee pee as it goes down the toilet. Maybe it’s time to start potty training this kid? He seems to be infatuated with it. He also loves taking things to the trash for me, which is both a good thing and a bad thing. We can ask him to pick up a piece of paper off the floor and throw it away, and he follows directions very well. But then I will find him unrolling the toilet paper and putting it into the trash can piece by piece, along with everything else that is within his reach.

I have found so many random things in our trash can this past month, like the Tivo remote, a wooden spoon and a whisk, lots of random toys and also G’s best pair of shoes. I try to gag and make terrible repulsive faces as I pull things out of the trash to make sure he knows it’s yucky and should be avoided at all costs. That plan might be backfiring on me though. I seem to have lost a box of earrings from my bathroom drawer. I’m pretty sure they are at the landfill by now, buried under an entire roll of shredded Charmin and possibly my best bra and a flip-flop.

At least they were my cheap earrings.

It’s a good thing he likes to help us vacuum and clean house, because look at what showed up at our house last week.

All contained in one convenient pint size table!

Which then spills all over the deck and gets tracked into my house by the handful and diaperful. So yeah, the ole Shark has been getting some serious use lately.

After I caught him splashing in the dog’s water bucket I decided it was time to bite the bullet and buy him a sand and water table.

Just look how happy he is in that germ infested doggie backwash bucket! But the brand new $50 toy with not only water but sand too??

He liked it a whole lot for the first 15 minutes. Then it became old news and he went right back to splashing in the dog’s water. Go figure.

As I am going through my photos for this update I am noticing that we have been spending a whole lot of time outdoors this past month.

April is a great time to be outside in Alabama. It’s the rare month of the year when we can leave the back door standing wide open and not have a $2,494 power bill from the AC running full blast.

It also appears to be a great month for not wearing any pants.

But that is really only an issue if he decides to become a Pantsless Peeping Tom.

Careful, kid. In 17 years you could get arrested for that.

Of course, you can’t wear shoes if you’re not wearing any pants, so that has resulted in a month of Bargain Town feet.

Look at these dirty little piggies! 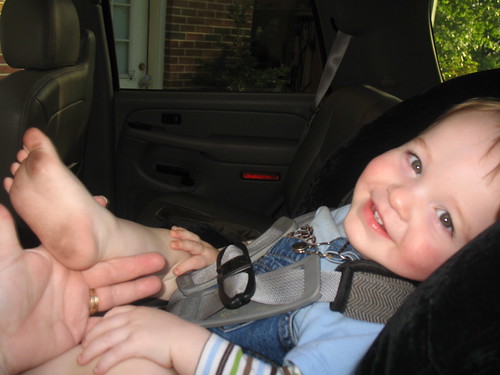 I’m so glad my kid is getting dirty, though, because that means he is having fun and getting some fresh air and exercise

Which can have other side effects.

Isn’t that the sweetest thing EVER?? He’s only done that one other time when he was 10 months old.. I love seeing this darling face passed out asleep in the high chaid. The best part was the loud snoring that was happening while this photo was snapped! I have a video of it but in order for you to see it, I’ll have to figure out how to transfer from my video camera to my computer. That just takes more brain cells than I have available right now.