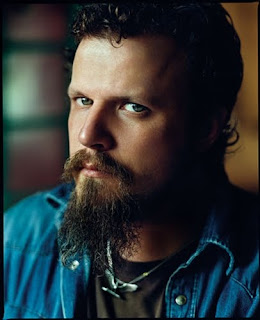 Reminiscent of George Jones and Merle Haggard and Hank Jr. and all the other old school nitty gritty raspy voiced country music singers that I grew up singing along with, Jamey Johnson is in a class by himself in country music today. He’s the love child of Steve Earl and David Allen Coe and Waylon Jennings. If you’ve been craving some steel guitar in your life lately, this dude is the real deal. His beard reminds me of my Uncle Tommy’s. Everything about him kinda reminds me of my Uncle Tommy come to think of it. His songs make me want to go sit around a bonfire at the high wall and drink some cold beer and see how long I can hold it before I have to do the one handed bathroom bumper hold behind the truck.

He’s written songs like Trace Adkin’s “Honky Tonk Badonkadonk” and “Songs about Me”. After some googling I connected the dots and figured out that he was the same guy who wrote George Strait’s “Give It Away” that won Song of the Year at the 2007 CMA awards. I didn’t know who he was at the time, but I was in the audience when he cracked me up with his acceptance speech by saying his ex-wife deserved half the award.

Check him out singing “In Color” with Keith Urban.

I love it when an Alabama boy makes good.

I’ll be waiting on my invite to join you at Hank’s grave one night, mmkay Jamey? You just let me know. I’ll be there.

In the meantime, I’m ordering my tickets to see you at the Alabama Theatre next Saturday night. Can’t wait!

« Whippersnapper Wednesday: Week 5
I’ve been workin on the railroad… »

« Whippersnapper Wednesday: Week 5 • I’ve been workin on the railroad… »