We’re trying this new thing at our house to get Garrett motivated to do what we say when we say it. Positive reinforcement, if you will, since we’ve really been struggling with the terrible two’s lately. I stumbled across this Melissa and Doug Magnetic Responsibility Chart at TJ Maxx one day.

“How cool is this?” I thought. 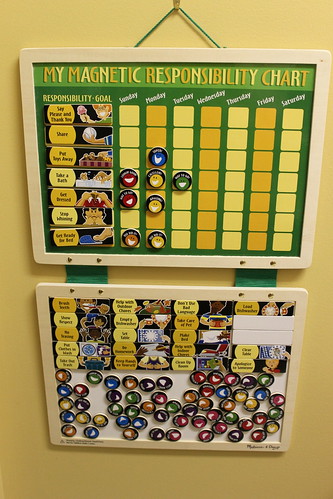 I hung it right by the back door so that we can move his magnetic “stickers” up onto the chart every day before we leave for school. 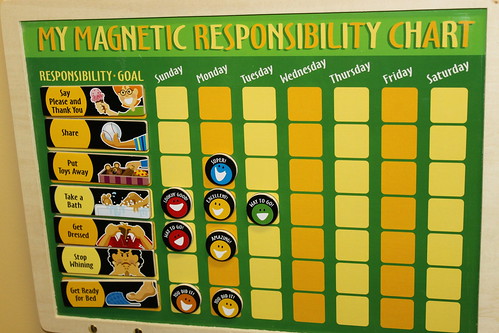 It’s got all kinds of responsible responsibilities for your kid to accomplish during the week. Each time he/she makes a goal, they get to move a magnet up for that day. My rule is that Garrett must fill up at least 3 responsibility lines in order to get a prize at the end of the week.

We’ll get to that part in just a minute though. 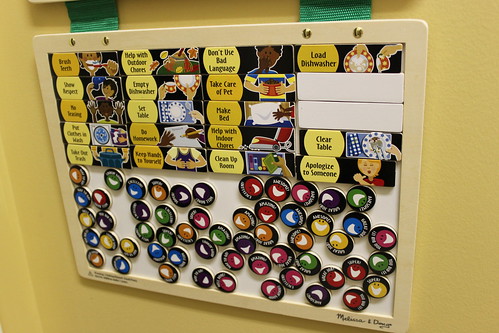 There are lots of responsibilities that we are not quite ready for, but he will grow into them. They also left a few blanks so you can fill in your own. Like “Stop poking mom in the butt” or maybe you could make a line just for your husband that says “Always kiss me goodnight.”

I dunno. Just be creative.

So here is the fun part of Project Responsibility Chart– DIGGING FOR BURIED TREASURE IN THE TREASURE CHEST!! WHOOOOHOOOO!!

Every Sunday if he has filled up at least three lines on the chart (and this will likely get more stringent as he gets older) he can dig a prize out of the treasure chest o’ beans. 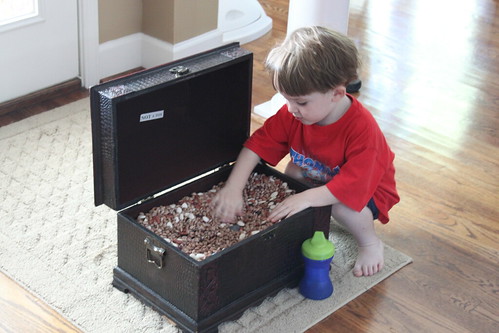 We threw caution to the wind and completely ignored the big sticker inside the chest that says “THIS IS NOT A TOY”. What can I say? We are rebels like that.

J filled that sucker up with dollar store trinkets and pounds of beans, and it became an instant hit at our house. Garrett loves digging around in all those beans looking for his pirate booty. Now when he catches himself doing something good he’ll look at me and say “I’m a good boy, mommy!” which makes my heart melt every time. 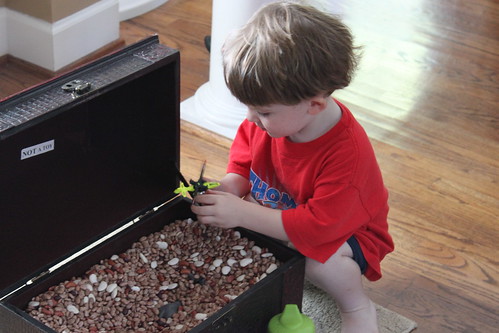 Today when he was “helping” me unload the dishwasher he pulled out two spatulas and started waving them around in the air. He looked at them for a minute and I could see his little wheels turning in his head. Then he looked at me and said “Want dick, mommy!”

I stopped what I was doing and looked at him and said, “What did you just say?”

“Want dick, mommy.” as he twirled his spatulas around.

I stifled a laugh and said “Show me what you’re talking about.”

Man, it’s super entertaining being a parent. This kid makes me laugh on a daily basis. Add that to the long list of words that Garrett pronounces incorrectly so that they sound vulgar! (Other mispronounced words include Percy and TV… I’ll let you jump to your own conclusions about what he calls them.) 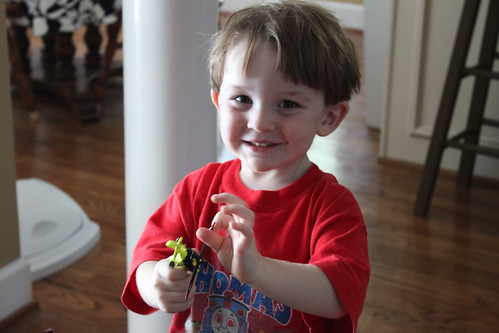 This kid is so hilarious! And he’s a good boy!

« De-beiging the bedroom
Faux No Mo’ »